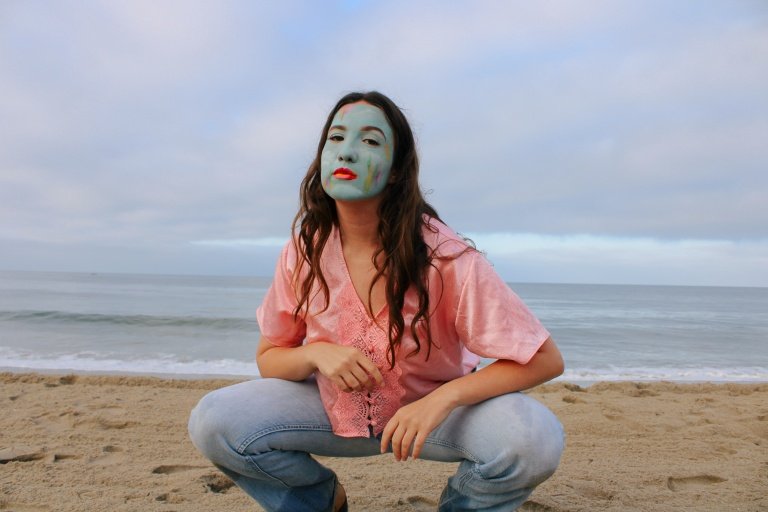 Playlist: Caity Krone shares the works of art that inspired Work of Art

I love listening to albums and trying to pick out the potential influences behind them. Being able to note similar inspirations between myself and my favourite musicians can make me feel closer to the music. Caity Krone has made my job so much simpler by curating that list of inspirations and muses from the creation of her new album, Work of Art. She’s come straight out of the gate with such a masterful album, one that feels so effortless in how perfectly it came together. I can only imagine that a glimpse behind the veil is equally life-changing. Everything from here on out is written by Caity herself, diving into her music and her music’s music. But first, let’s listen to “Work of Art.”

I like to call Work of Art my unrequited crush record, the prelude to deep and tangible love. To me, crushing on someone makes them feel like an apparition. There’s so much imagination involved in the whole ordeal, pang-y feelings that so often feel too juvenile to bring up in conversation. Making these five songs made the amount of time I crushed and crushed on this person feel a lot less silly, because I turned feelings I couldn’t successfully communicate to anyone into songs I’m immensely proud of.

I made this companion playlist. It consists of songs that remind me of Work of Art thematically and songs that I listened to incessantly over the three years I wrote and recorded the EP. I also wanted to highlight a few women in particular who have shaped me into the writer and artist I am, and will always inform the music I write in one way or another.

Dreams by Fleetwood Mac was my first favorite song. Groovy and ethereal, the song felt larger than the sum of its parts. I was mystified by it — I couldn’t understand how lyrics, production, and a vulnerable and sharp vocal performance could come together to create a musical moment that brought everything inside of me to life every time I heard it. When I started writing for my first record, I chased the feeling of that song, and found my voice as a writer in the spaces I stopped trying so hard to write like Stevie Nicks. A lot of the demos that didn’t make the EP sounded like knock off Rumours tracks.

When I was fourteen or so, Adele released 21. All the girls I knew who loved to sing wanted to be Adele, and to me she was the ultimate inspiration at a time when I was in middle school, relentlessly teased about my weight, and when I wasn’t being teased for it, I was saying horrible things to myself about it to fill up the silence. Hearing her sing, strong and inimitable, beautifully lit in black and white on that cover, made me feel like I could do it too. Her ear for perfect pop melodies and the timeless power and soul of her voice will always make her a huge inspiration of mine. My favorite songs changed over the years, but “I’ll Be Waiting“ is the one I’ve been returning to a lot lately.

The year prior, Taylor Swift released Speak Now, the first album that made me want to be a songwriter. I tried to write poems about unrequited love and fairytales, but the imagery and pictures Taylor painted never sounded authentic coming from me — it was the first time I had an inkling of realization that recycling the words of your heroes usually won’t beget meaningful work. I remember always getting mad at how much I loved her lyrics, I kept thinking, ‘I want to do that’. When Folklore came out, I immediately felt every nerve ending come alight at “Cardigan“. I sang it in my kitchen until I cried and I didn’t know why. Could I ever write something I love as much as this song? The same question I ask myself every time I hear “Dreams”. “Invisible String” is my second favorite song on the album, and the one that thematically feels the closest to Work of Art to me — sometimes it feels like I’ll always write music about that one person, like they’ll be the undercurrent of my life forever.

Songs that break your heart the first time you listen to them always stick with you, I think. I first heard “So Far Away“ by Carole King in the tenth grade when my then best friend, who was a much better singer than me, so I thought, sang it for an audition in our concert choir and ran out crying halfway through because it reminded her of someone who died, and I remember being heartbroken at all of it – the way she ran out like a scene in a movie, the way her soulful soprano carried the lyrics straight to my heart better than I could have ever sung them. I still did, though, and probably will again. Lately “I Feel the Earth Move” is my favorite one to sing.

Sometimes I feel like Joni Mitchell’s music is the essential soundtrack for any kind of growing pain. I didn’t dive deep into Joni until I was in college. I had heard “The Circle Game” at summer camp as a kid and it became one of my favorite songs throughout my last year of high school, but I didn’t know much more than that and California until my sister’s best friend would play her while we drove down Sunset from the Palisades to Brentwood, or while we ate dinner at the overlook on Tigertail, watching the kitchens window light up the Brentwood hills against the melting creamsicle evening sky. He played Blue on vinyl while I took his and my sister’s prom pictures, and I marvelled at the record player when the first chorus of “All I Want” came on. Then I listened to Court and Spark from top to bottom and never looked back. “Woman of Heart and Mind”, “Edith and the Kingpin”, “All I Want”, and “Down To You” were all there just when I needed them — in cathartic hour long showers in candle lit bathrooms,  thirteen mile walks after a hard day, long drives up the coasts with friends.

Artists, songs, albums have a way of finding you right when you’re ready to hear them. When I needed to learn how to cut to the heart of things and say it all straightforward, I first heard “Here I Am” by Dolly Parton. When I need a reminder to hone in my power as a performer I listen to Linda Ronstadt or watch an Aretha Franklin performance online. When I feel isolated, like the best music has already been written (and maybe it has), I listen to the music being written by young women right now, like Jensen McRae, Georgia Greene, Madeleine Mayi, Samia, Lomelda, Ryann, McCall, Ayoni, Angelica Garcia, Bella Porter, or Faye Webster. Right now it feels like a very auspicious time to be a woman writing music, and one day I hope what we’re writing will inform someone else’s writing someday. To me, the best thing one Work of Art can do is beget another.