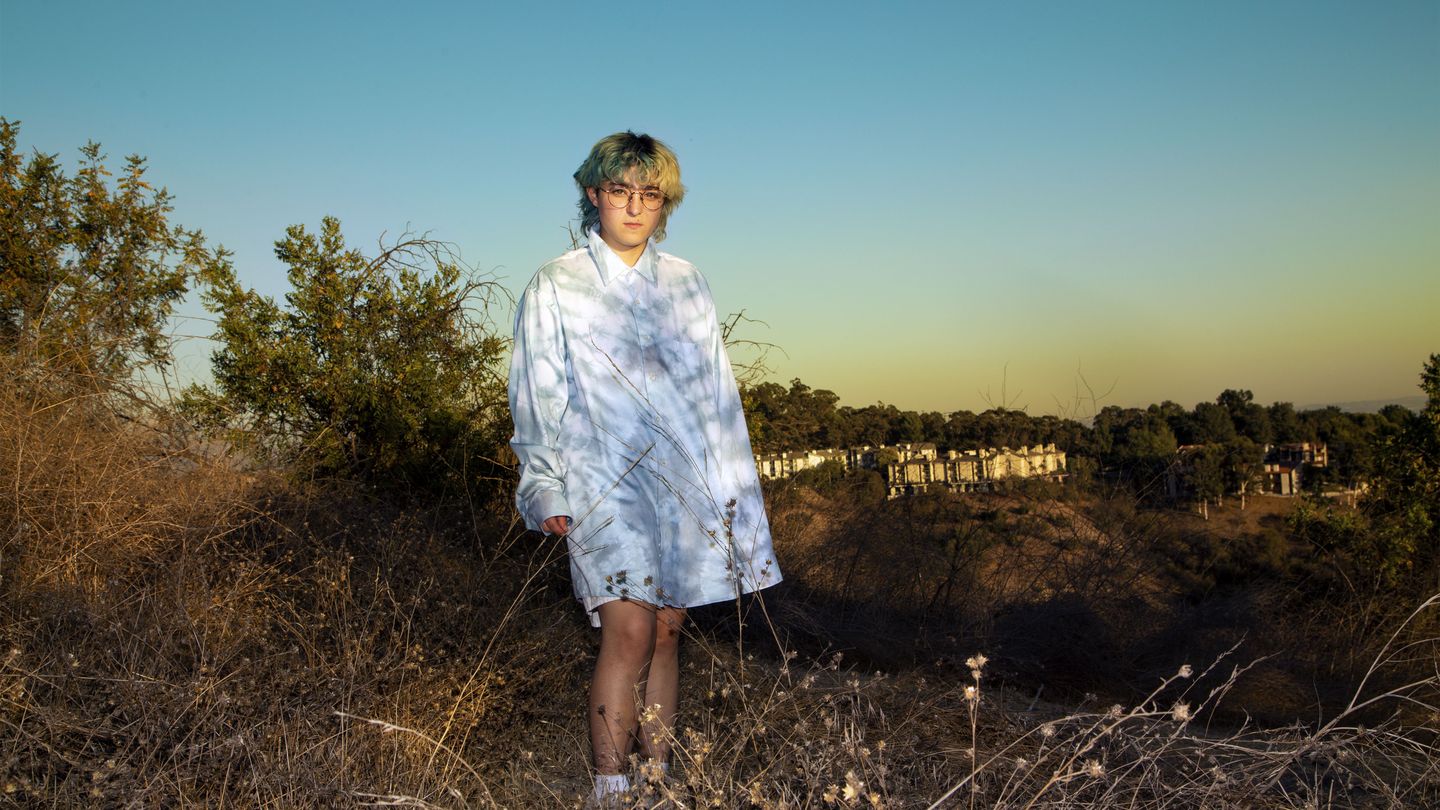 Don’t be afraid! Claud’s ‘Super Monster’ shares what it’s like being young and in love

On Super Monster, Claud is the director, main protagonist, and love interest in this coming-of-age auditory film. In an era where finding a connection is dependent on a digital cloud, the indie artist — formerly known as Toast — shares what it’s like to be independent yet attached in their debut album. Signed under Phoebe Bridgers’ label, Saddest Factory Records, it’s no surprise that many of Claud’s songs leave listeners feeling dismal, antsy, and enamored all at once.

The first lines of the album give away a constant theme in Claud’s songwriting: self-consciousness in relationships. “I fell in love like a fool overnight / I fell behind, can’t keep up with real life.” Throughout the album, listeners hearken to Claud’s inner thoughts on being in a relationship, questioning their role on whether they’re doing this the right way.

There’s rarely any reassurance or security in many of the relationships discussed throughout Super Monster. Claud has to rely on themselves to make the right decisions that will ultimately benefit both parties. With so much at stake, it’s conspicuous to recognize why Claud feels a bundle of doubt and regret.

Picture this: you’re driving through the city late at night, a couple of hours before the sun rises to welcome a new day. A mellow, relaxed song pops up next on your carefully curated playlist. It leaves you in a daze, reminiscing on a past relationship that abandoned you with hesitation and uncertainty for your next partner. Claud’s “Overnight” marks the first scene of this film, cementing the skepticism listeners will hear again in songs to come.

Following “Overnight” is “Gold,” a space-type retro beat, as if the listener is ascending towards a spaceship. At times, the track leaves you floating in space, admiring the earth from above. Although the title summons imagery of royalty or an object of desire, the lyrical content says otherwise. Claud expresses turmoil in a relationship, painting an image where what was once beautifully displayed to the public is now “rust on gold.”

The accompanying music video, directed by Christina Xing, demonstrates a group of people, adorned in marvellous costumes, enrolled in an etiquette class. The video is separated into three acts, each revolving around societal expectations. The colourful group, involving Claud, rejects these assumptions and incites a beautiful, chaotic uproar, breaking free from traditional norms.

If you’ve ever had a solo crying sesh or are planning one in advance, “Soft Spot” is the go-to tune. As the track plays, one can’t help but imagine a supercut of all the good-times and what-ifs of past lovers, friends, and loved ones. The sound is haunted, but in a cool way. From the first couple of guitar strums, the nostalgia hits, changing the mood of the current world.

The music video for “Soft Spot” drives home this feeling of missing that old connection and wanting to get back together, even if it’s just for a little while. A hooded figure is seen packing up boxes in the moving truck where Claud is also stored away. They sing,

“I wish I left all my things at your place so I could come get them / We’d do things we might regret and say that we could make exceptions / I just can’t take the rejection.”

Shifting gears, “In or In Between” begins to pick up speed with a fast-tempo high hat. As the song progresses to the pre-chorus, the rapid sound drifts away, returning for the chorus. At first listen, the song feels a bit disoriented, as the quick beat is juxtaposed against Claud’s steady, dream-like vocals. This artistic decision ties in well with Claud’s lyrics:

“Please, can you tell me what you mean? Can you spell it out for me? ‘Cause your lips are hard to read.”

If you’re looking for a late 2000s-esque, indie rock song to add to your soundtrack of life, look no further than “Cuff Your Jeans.” This musical composition exudes the sensation of traveling by California beaches, with its wavy guitar riffs and balanced drum beats. The song’s existential lyrics paired with a pop beat is the definition of the Gen Z experience.

Taking the form of a lost VHS tape, the music video shows Claud rising from the grave, going about their life, climbing a giant version of themselves, falling, landing back in the grave, only for what appears to be the beginning of the video. This cycle of failing and rising is never-ending, which highlights Claud’s persistence and determination. Instead of rolling up the sleeves, preparing to fight, they are cuffing up the jeans, getting ready to take risks.

“Ana,” featuring Nick Hakim, is the first track titled after a person’s name. It’s a somber track, as it talks about letting someone go. What elevates the song is incorporating a choir for the chorus alongside a grungy guitar melody, heightening the levels of detachment. “Ana” conjures a scene where two lovers are falling out, with one being at an airport, both not knowing whether they’d reunite ever again.

Moving from one sad bop to another, “Guard Down” is heavily reliant on drum beats, which makes the melody more indie pop-based. Claud experiments with this track by incorporating a distorted, robotic-like rap, but ends with pure acoustics. At moments, the rap section was indistinguishable, but it adds to Claud’s aesthetic of doubt.

The mantra of the track, “don’t let your guard down,” is translated to the animated music video, showing Claud following a potential lover, only for it to end as a dream. It’s a reminder to be alert, to not be vulnerable.

Can we talk about the dreariness of the guitar in “This Town,” and the droning lyrics? It’s remarkably pleasant to hear on a rainy day. Although the lyrical contents of the track discuss leaving an area because of a problem, it encourages us who are also from small towns to escape. Claud sings,

“Jordan” is another song named after a person, and it’s one of Claud’s best anthemic tracks. The spirit of the musical piece is redolent of Green Day’s “Boulevard of Broken Dreams,” but with less electric guitar and more dulcet vocals.

This next track goes out to all the haters, homophobes, and scums of the earth. “That’s Mr. Bitch To You,” featuring Melanie Faye, is a pop-punk track that hypes you up, ready to fight those who try to tear you down. The juxtaposition of Claud’s soft, friendly vocals with such cheeky, brazen lyrics is sending me! Shout out to Melanie Faye for her amazing guitar work, shredding her solo! Plus Blu DeTiger on bass? A killer match made in heaven.

Claud transforms into a mythical being in “Pepsi,” creating an ethereal landscape, inviting us in to indulge within the beats. Melanie Faye also lends her guitar magic to this song, creating an intricate sound to the piece. A standout element of the track is the inclusion of a soda can being opened. Although a small detail, it adds to the campy title.

Imagine if “A Thousand Years” by Christina Perri and Kelly Clarkson’s “Breakaway” mingled, got together, and birthed a child. This is what “Rocks At Your Window” feels like. A minute into the track and you’re greeted with sprinkles of dazzling glitters of hope. It’s the song you would play on your boombox (if you had one) while standing outside your crush’s window at night.

The last song on Super Monster, “Falling With The Rain” featuring Shelly (a band consisting of members Clairo, Josh Mehling, and Noa Frances Getzug), is one where it’s sort of upbeat, but not really. Accompanied by a 2000s pop-punk beat, Claud sings about feeling down, “Feeling out of my head/ Coming undone thread by thread,” but then bouncing back up, “Give me some time so I can fall back into place.” As with rain, you’ll fall quickly, but eventually, you evaporate back up.

In an interview with Apple Music, Claud opens up about their intentions with this debut. “I deserve to feel love,” they said. “Sometimes people forget that they’re capable of giving and receiving it.” Some people view love as a monster, with its terrifying commitments and ambiguity. Ultimately, Super Monster is not something to be afraid of or avoided. Welcome it into your life, and unlock what it has to offer.