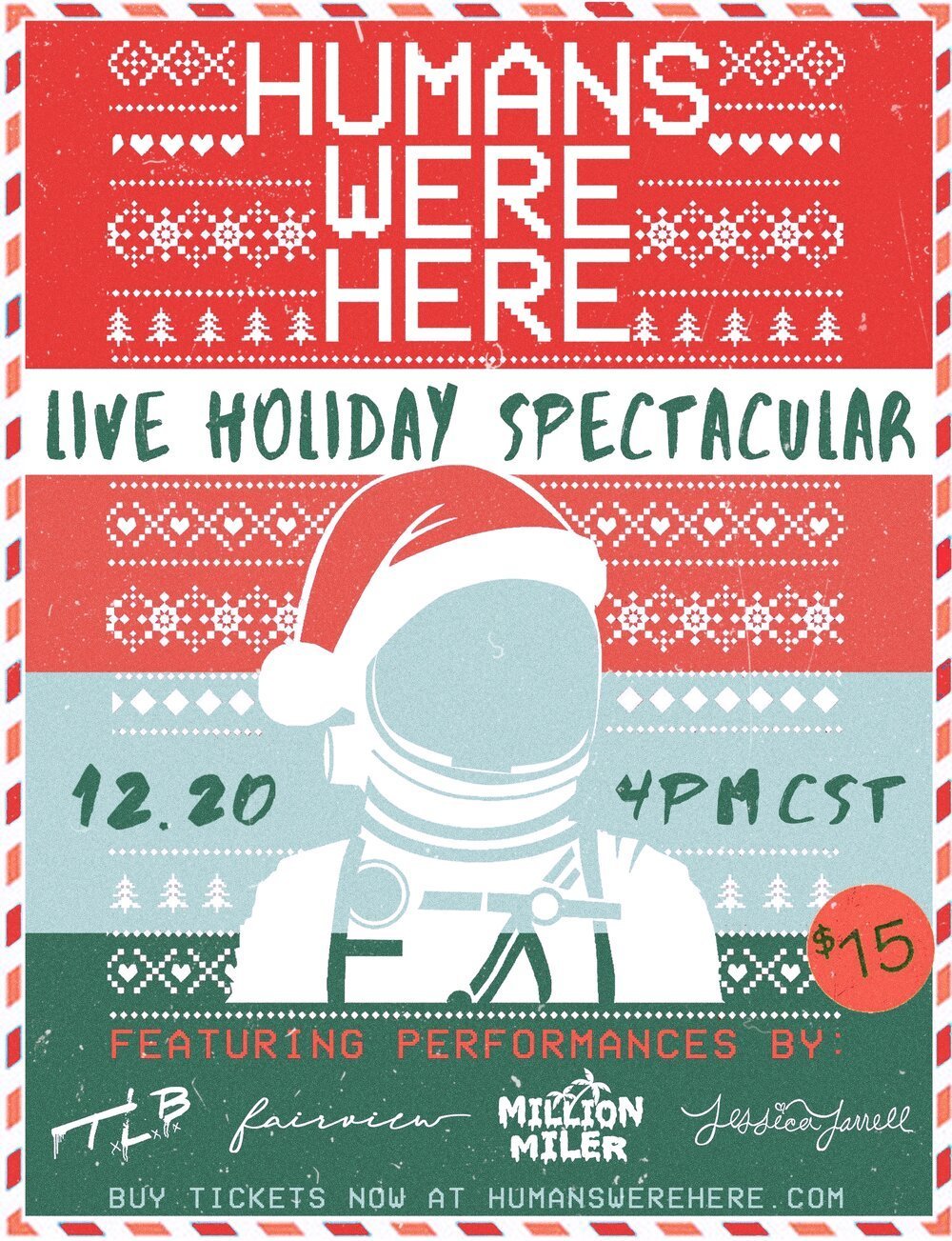 Led by Tom Higgenson of the Plain White T’s, Humans Were Here’s Live Holiday Spectacular is a warm, intimate look at a label’s showcase under quarantine. The performances are pre-taped, but they still carry the festive energy of a typical set, even with the virtual limitations. Higgenson himself— along with Fairview’s Lizzy Zyburt and Matt Richardson— are cheerily interspersed between performances, their eyes smiling and bright behind their black face masks as they interact with the live chat.

The performances themselves are sweet-sounding works spanning from indie pop to palatable hard rock. Notably, Humans Were Here hosts a plethora of Higgenson’s own side projects beyond Plain White T’s. TLB, his punk group, sit below a grainy filter as they deliver rollicking original Christmas tunes. And under his moniker of Million Miler, he’s coated in playful, ‘80s mood lighting as he sings the upbeat, crunchy synth-pop tunes. But the label hosts an array of other acts, too: Fairview themselves, a married couple, exchange warm glances as they sing duets to one another, with warm camera shots as they duet on a piano. Jessica Jarrell, sweet-faced beneath a light dust of incandescent lilac eyeshadow, sings lines like “Well, well, well, you can take those sleigh bells straight to hell, hell, hell” in a unique, eyebrow-raising Christmas breakup song. And the masked Robot.ex doesn’t make an official appearance until the end of the livestream, but he makes his mysterious presence known as he cuts in with cryptic, automated interjections.

Even for all the Christmas positivity, there’s still instances of the pandemic’s influence in the livestream, but the hosts do their best to work around it. They engage in the kind of live, patient interaction with the chat that you couldn’t get with a real-life show; at the halfway mark, there’s an amusing instance of pass-the-shirt when winners of the trivia game reveal that they already own Humans Were Here’s offered prize; and, finally, the way they bow out with a heartwarming group cover of Plastic Ono Band’s Happy Xmas (War Is Over)— with clips of every individual act, layered in perfect harmony— is reflective of the medium’s limitations, as well as the new opportunities it opens up.