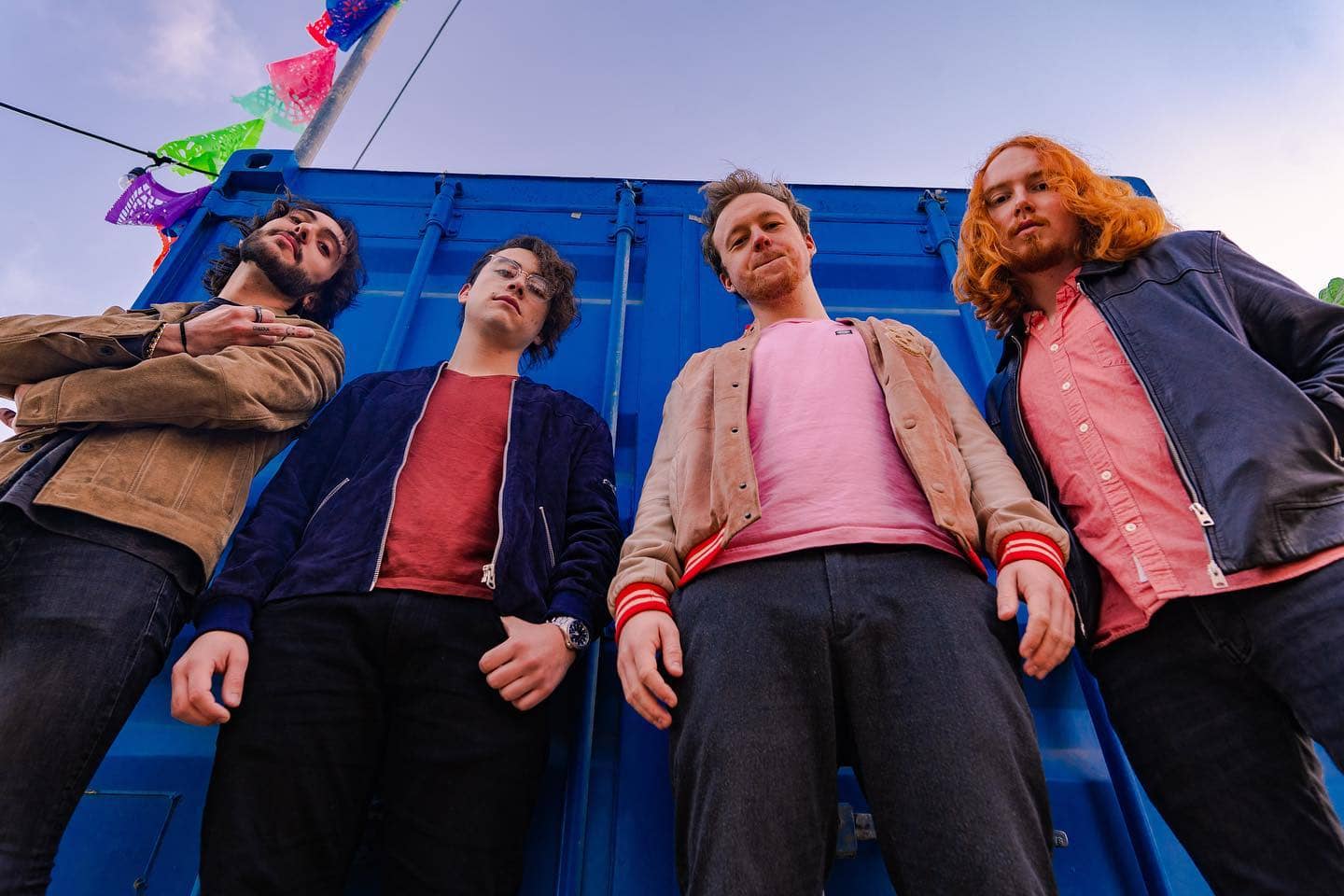 Interview: Lithic are making the world more colorful during the cataclysmic shift of 2020

I wrote about Lithic earlier this year and their funky yet haunting single “Nightmares.” The combination of upbeat music, heartbreaking lyrics, and that post-hardcore breakdown three minutes in was enough to turn me into a steadfast fan of this band.

As a group who is often playing packed gigs all over the place, I was able to catch them with some unfortunate downtime (thanks so much, COVID) and pick their brains. After this, I’ve now got a new addition to my travel bucket list AND an insatiable urge to hear whatever new music these guys are working on.

Not only will you find our interview below, but you’ll also find a guest playlist curated just for you by Lithic. ♡

How’s your pandemic going so far? Some bands seem to be creating on hyperdrive, others are struggling to feel creative at all. How have the last few months been for you?

Stone: As individuals we’ve all been in “Input mode”; we’ve all been actively bettering ourselves. Writing, producing, creating, and exercising have kept us fervent about moving forward, although we have very little idea what may happen next. That said, Lithic has reverted back to 4 dudes who just love to chill and play music together. We’ve been able to just be homies again, and that has been a total blessing.

Once we do hit the stage, however, I don’t think we’ll really be able to contain ourselves; I can safely assume shit will be nuts. Yes, we’re all losing our minds in quarantine, but at least we’re going crazy “together” (via somewhat routine 4:20 Zoom meetings).

There’s a cool balance between funk, rock, post-hardcore that braids itself together in your songs (if I haven’t said it enough yet, I’m obsessed with the breakdown in “Nightmares” and how the song changes direction in an instant). Is this an active part of your writing process, blending all of these genres together? Are some songs more rooted in just one sound?

Jack: I wrote “Nightmares” a couple years ago with the idea that the song would be so groovy that you couldn’t help but dance to it. I knew the subject matter would be really dark, however, and I wanted the listener to have to lean in to truly understand the song. Once it was mostly written, I felt that the lyrics embodied the sadness and longing I felt, but there were other colors that weren’t yet represented: anger and frustration.

Knowing my writing partner Stone’s ability to write the meanest, baddest riffs in all the land, I asked if he could write the heaviest riff Lithic has ever done for “Nightmares.” His immediate response was, “Oh, fuck yeah! No problem.” and I was amazed to witness him write the massive breakdown riff in only a few minutes. The song was complete. Lithic has never been about honing in on one genre; we always treat each songwriting endeavor like a brand new adventure. That’s why each song is so unique!

You’ve had a great history of packed live shows and residencies. With the shutdown of live music for the foreseeable future, how are you filling that void in your schedules?

Stone: To be honest, we’re still somewhat disjointed. Both Jack and I had to go back home to take care of our families at the onset of COVID, with Juan and Marv holdin’ down the West coast. Thankfully, I left my home in Miami to return to LA prior to all the Florida craziness (Thanks, Ron!). Jack and I, along with a cabal of cretins (our manager, Mr. Matthew Ladis, among them), met up for a lil R&R at Bear Lake, in Utah; a beautiful getaway from all the madness.

BRKN Love are the real deal with new self-titled record

Besides mad-chillin, we’ve all been writing and producing like madmen. I love to practice guitar too, but when I’m not doing that I’m making the world’s worst trap beats, with only the most offensive 808’s. The folder full of awful beats on my computer gets bigger each day!

What’s the weirdest place you’ve found inspiration for your music? Whether it’s from a band/genre you didn’t expect, a strange interaction, divine intervention…

Jack: The desert has always been a spiritual place for me. It seems to re-center and cleanse me in the best way possible. Wandering in that dry heat all day can be both maddening yet inspiring; it’s hard to put into words. One of my very favorite spots is Goblin Valley, Utah; I camp out there every year, without fail. It’s an extreme and unforgivable landscape, but the rock formations and panoramic views are unmatched. In the middle of the day, the temperatures tend to soar above 100°F and random sand-filled wind gusts threaten to carry you off like a leaf.

It’s during these unforgiving desert moments that I seek solace and cover in a massive cave, aptly named the Goblin’s Lair. I think the Lair is by far the “weirdest” place I’ve found inspiration for music. It’s infinitely worth awkwardly scrambling over the rocks with a bulky-ass guitar on your back to have these epic cave jams.

You’ve released three singles already this year. What’s up next?

Stone: Man, we’ve got tons of music in the pipeline. Now it’s just a matter of time before we get back on our horse and hit the road running. Our individual input in ourselves will yield an incredible ensemble experience, and we’re all fervent about the future. However, the current state of affairs has us dumbfounded about how to proceed. Regardless, we’re happy we get to be creators during such a cataclysmic shift; to participate in making the world around us more colorful, more unique, and more fun is an honor.

Get recommendations for Utah hiking trails and mean bad riffs from Lithic on Instagram (and follow them on Spotify!)