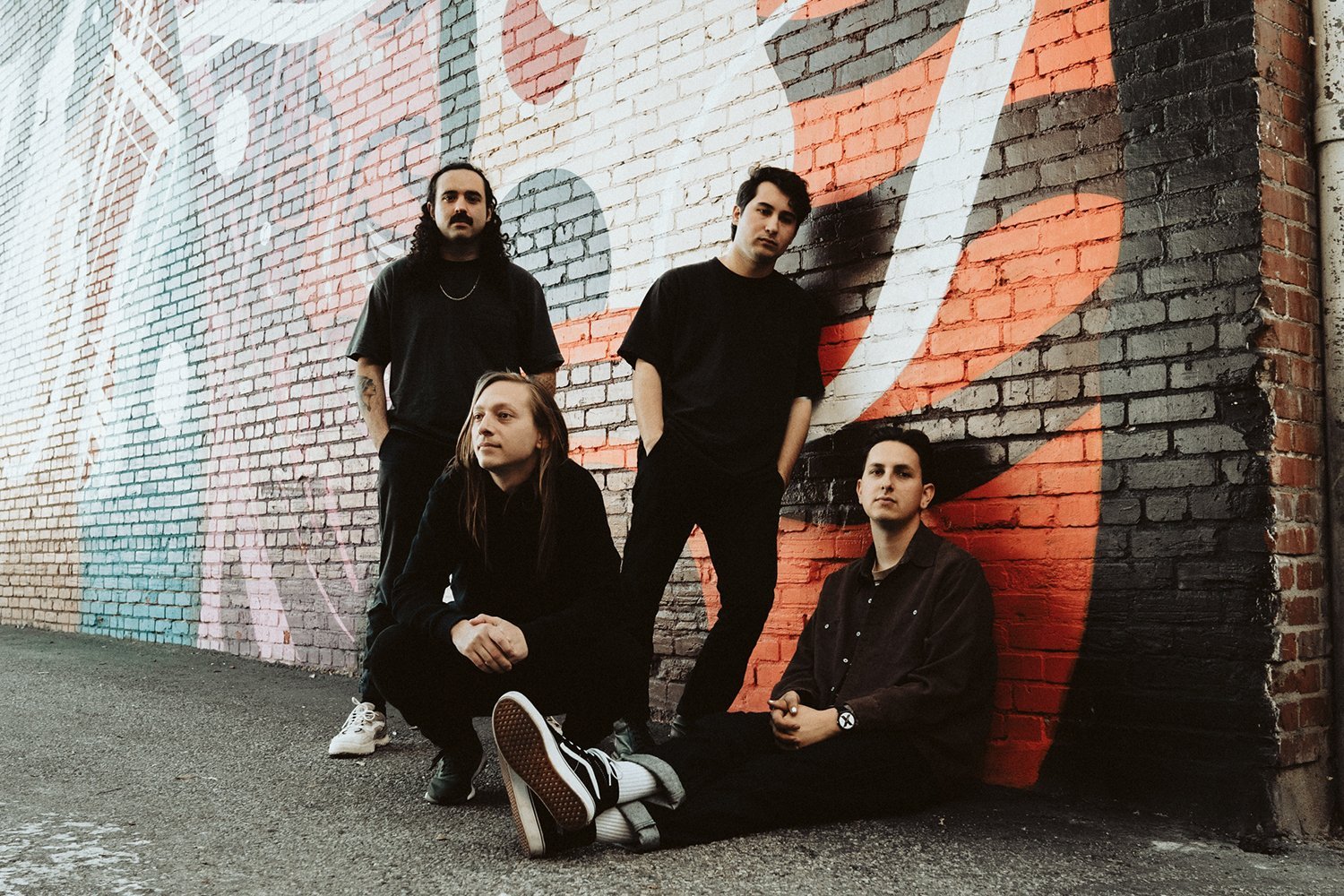 Interview: Movements’ Patrick Miranda shares a peak inside new album “No Good Left To Give”

Movements have created a catalogue of music based in honesty and confronting the dark parts of yourself head on. Despite how well Feel Something already showcased this, they dive even further into the depths on new album No Good Left To Give, out September 18 via Fearless Records.

Long time fans will find a comfortable, familiar sound on tracks like “Don’t Give Up Your Ghost” or “Living Apology” but each track sparks a moment of joy when you hear them try something new and different. The choruses on this album soar, the guitar tones create an atmosphere that envelopes you, and the drums almost command your heartbeat to follow the stress level of the song. It’s a multi-sensory experience.

I chatted with vocalist Patrick Miranda about what it’s like to release an album in our changing world, the wonders of therapy, and the future of Movements. Give it a read below, and order your copy of NGLTG.

Feel Something was already very raw and honest, but No Good Left To Give feels especially vulnerable. What did you learn from recording your first full length that influenced the making of this album?

I think as a whole, we’ve just become better and much more efficient at writing songs. We’ve been writing together for, you know, going on six years now. I think we’ve fine tuned our process, and more-so our style of writing. The process for Feel Something was a year and a half worth of actual writing, whereas this one we spent maybe six to eight months putting in effort every day. It was a lot faster and it was a lot smoother.

I think our writing style has just become so much more mature and so much more, um… I don’t know. It’s just better? *laughs* We’re really, really proud of these songs. I think I learned a lot from writing and touring Feel Something that I was able to apply to this process, just as far as what I wanted to say and how I wanted to say it. Just how we wanted to be perceived as a band moving forward.

I’m kind of curious, I know you’ve spoken before about how you started going to therapy a few years ago. I am also a huge fan of therapy. Have you found that diving into more of why you feel certain ways or getting to understand your mind better has influenced how you express yourself through writing?

Yeah, I think going to therapy has made me understand myself as a human being so much more. It’s made me a much better person, I think. Not that I was ever necessarily a bad person, but I think therapy and hoping to understand why I am the way I am and how my brain functions in certain scenarios helps give me such a better understanding of my emotions and how I deal with things. I think it’s given me a level of emotional maturity that I didn’t necessarily have before. And it’s given me the opportunity to really work on myself and put that into the songs that I write. I like to think that’s able to come across in this record, but I dunno. I also don’t know, I’m my own worst critic, so I have no idea whether or not these songs are good. Sometimes I listen to it and I’m like “yeah, this is great stuff!” And then other times I’m like, “god, this is really bad.” So, I don’t know. But I do think therapy has been super important and really beneficial for me as a person.

I think it’s funny how some people see therapy as needing to fix something or something being wrong, when it can improve something for anyone. Especially for creatives, there’s a lot of pressure to share yourself with the world and put yourself out there constantly. You need to process your own things when other people are also out there processing your personal feelings and experience.

And now you’re releasing this album in a different world than you recorded it in. You spent a good part of the last year creating and now that it’s release time… there’s no touring, there’s things missing that would normally be part of an album release. What are y’all doing to keep this album release exciting for yourselves?

Honestly, it’s hard. It’s really frustrating. We had taken most of 2019 off with the expectation that we would write an album, record it, and then be able to hit the ground running in 2020 and have it be a really big year. Probably the most successful year we’ve had as a band so far, and you know, have it be a way that we could really push this album to as many people as possible. And then unfortunately, that didn’t get to happen. The record should have already been out. It should have been out months ago, but we pushed our release back because we were holding on to that shred of hope. Like maybe by fall, things will be better. Maybe we’ll be able to tour this fall.

We all can tell by now that that’s not going to happen for at least another year or so. It’s definitely frustrating, but we’re going to do what we can with it. We can only do so much with what we have available to us and that’s, you know, social media and live streams and that sort of thing, as well as special giveaways and whatnot.

It sucks because a lot of bands are doing these cool street concerts and whatnot, but our drummer lives in an immunocompromised household. It’s really dangerous for him to be doing anything just because he could be putting his family at risk. We try to be really conscious of that, which means that we can’t do anything full band. I think on release day, we’re going to do a little acoustic session livestream, just me and our guitar players. Maybe further down the line, once we can do it safely, we can try and stream a concert or something, but as of right now, it’s pretty up in the air. I don’t know. It sucks. I just wish we could tour so badly. But you know, it is what it is.

Interview: The OBGMs are the future faces of punk rock

I really respect that choice though. I’m immunocompromised, and it’s such a stressful time to be in this position. I totally respect your choice to put family over everything else.

Yeah, absolutely. It’s so scary. The last thing we’d want to do is put anybody at risk of anything at all. And I see other bands that are going and doing these things and I’m like, man, like… that’s cool, but I can’t. Part of me can’t help but think like, fuck, they’re too close together. You know? It’s so nerve racking.

Yeah. There’s so many moments right now where I’m like, are we being a little too risky at this point by even chancing it? But fingers crossed everything starts to turn around soon so we can celebrate this album. You’ve had such a successful few years, just a steady upward trajectory the whole way. It’s been wonderful to watch. What’s something you haven’t accomplished yet that you’d love to be able to do with this album?

Well, I would love to be able to go on tour with a really big band, like our first time opening a stadium tour or something like that. That probably would have been my hope for this album. There was talks of maybe trying to see if we could get on like, a Bring Me The Horizon tour or just something big, you know? Bigger rooms than we’ve ever played before, even if it was as an opening slot. That was really one of our biggest goals, to do that with this record. I still like to think that’s possible, but at the same time, I really don’t know if it’s possible at this point. If it doesn’t happen on this record, maybe the next record cycle. Depending on what happens, we may end up just fucking writing and recording another record before all this is even done and then have two records to tour. You never know. But yeah, that was one of my big goals and hopefully it can still be achieved at some point.

That would have been such an amazing tour too.

I feel like bands will hopefully have a second chance at everything, everybody’s very understanding of the fact that things aren’t going the way they’re supposed to. It could be interesting to see how bands end up touring what they would have done this year in the future and how the extra time changes things.

Right. I mean, we’ll see. There’s this constant worry in my head that even when things go back to “normal,” what is normal even going to look like? I’m very anxious and nervous about the fact that normal could be something different than we’ve ever known shows to be. That would suck, because so much of the energy and the fun that comes from shows is being in that crowd and having the constant pushing and moving and shifting of the crowd and just that vibe, you know? It’s something that I grew up loving and that I’m sure so many people in the scene are also so fond of, just because it’s unlike anything else. I would hate to see shows become only socially distanced for a long time because of this.

I wonder how that would affect a new generation of music fans actually getting into live music without that addition to the experience?

Totally. Yeah. I don’t even know. It’s going to be crazy. I think that we’re going to see some very interesting changes to the music scene, but hopefully it’s not too much.