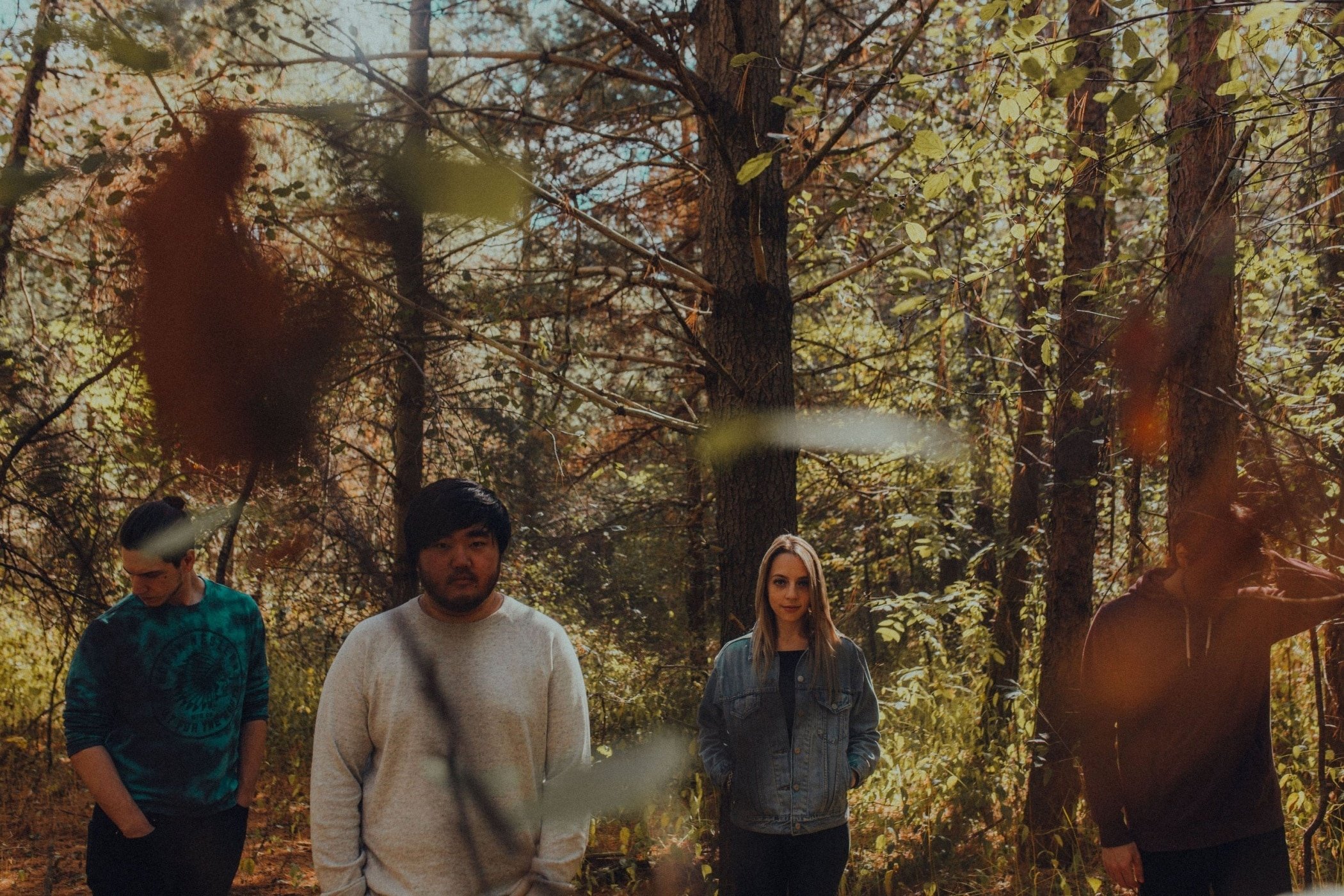 When listening to new music from my favourite bands, I often wonder what songs didn’t make it to the album. How many songs are out there that just didn’t get selected for the final track list? New Design have given us that glimpse behind the veil with their new What Was Left Unsaid EP, out now via Sunday Drive Records.

Featuring tracks from the recording of their 2019 EP, Where I Need To Be, New Design have given us a glimpse into their creative process. “January” was recorded right after the making of the EP, and the two remaining tracks are more reminiscent of their 2015 full-length. Together, it gives us an interesting layer to revisit the past music with, and three fantastic new songs to fall in love with.

I chatted with guitarist Joe Angilletta about how this project came together, future plans, and what they’ve been up to these last few months in moderate isolation.

So how did this B-sides EP come together? Was this a quarantine project or planned beforehand?

The project came together after our friend Rob Taylor reached out to us about a recording opportunity at the Ontario Institute of Audio Recording Technology (OIART). He was a graduate there who was currently working as a TA and building his producing/engineering portfolio. We weren’t exactly sure what to expect going in, but we were a fan of Rob’s work for his old band The Cardinal Dream prior to his training at OIART, so we had a good feeling we could make something cool and release-worthy.

We’ve been sitting on the B-sides for quite a while but only wrapped mixing and mastering up this year so this is not a quarantine project. Two of the songs, “Forward” and “What Was Left Unsaid,” were left off the Where I Need To Be EP due to a multitude of reasons (budget, direction, and overall readiness) while the track “January” was written directly after coming out of the studio with Anton Delost.

Being a band that has always balanced post-secondary or full-time work, our writing/recording/release process has always been quite drawn out. For example, Where I Need To Be was recorded in December 2017 and released in June 2019 and the What Was Left Unsaid EP was recorded in December 2018 and released over July-September 2020. So we’re about a year and a half behind haha. But I think this is the reality for a lot of bands.

How much did these songs change from when they were originally written to this belated recording process?

Nothing super drastic, just small in-studio ideas, and I guess a lot of the melodic and lyrical content that was written closer to recording than the actual writing process.

If anything, the recording process just forced our hand to actually finish these songs. Usually we’ll finalize instrumental parts and structure, and then hit a wall with lyrics and melodies and move on to something else unless we’re super inspired. To combat this, all members have been contributing lyrics and melodies and this sort of forces our lead vocalist Jeff to magically string things together come studio time (he doesn’t really like doing this because he works in creative bursts but honestly, in my opinion, some of our best vocal melodies and ideas came from a last-minute finish from Jeff).

One notable change I can point out is the solo section in “Forward.” We went from no instrumental section at all to a more post-rock driven tremolo-picked octave solo. But then I thought “well that’s what we always do,” so I borrowed a Digitech Whammy Pedal days before tracking guitars (for non-guitarists: the effect used on the solo and “Killing in the Name” by RATM) and decided to force a solo using that into the song. I think it worked out.

Is future music more likely to sound like the 2019 EP or the B-sides?

I’m hoping and aiming to make the next release even more distinct and explore some new territory, but in a way that still feels very true to us. I’ve been doing a lot of writing over the past few months, either creating new ideas or reworking old ones. A lot of ideas feel at home with Where I Need To Be, like a sort of follow up of different songs that highlight what we do well. But there are a few ideas that to me feel like we’re treading new waters. I’d like to experiment with that side more and build an album completely around that or blend the two sounds in a seamless way.

Lemondrop is anything but ‘wannabe’ on “Shut Up Move On” EP

It’s hard to say right now what will end up on the next release as we haven’t jammed as a band since March, and so many of our song ideas never see the light of the day (this could have easily happened to these B-sides which would have been a shame), but I promise it will be the best thing we ever do. I mean, I like to think we get better with every release at least.

Besides up-cycling past songs and turning them into something new, what have you been doing to stay creative/sane during quarantine?

I think I was the one hit hardest in terms of change to my regular lifestyle, since I wasn’t able to work for the majority of quarantine. I took it upon myself to learn about self-recording and started working on demos (even tracked my own solo song that I may or may not release, but when I say release I mean “throw online randomly”). I finally had the chance to figure out and experiment with some of the pedals on my board — some of them have like 50 page manuals you actually need to read to know how to do things. And I watched so much anime: all of Naruto/Shippuden, Food Wars, Promised Neverland, rewatched Haikyuu.

Jeff and Mel continued working as usual, but mainly from home. They pretty much live in a Discord server with our close friends, and game and voice chat frequently, so the stay-at-home lifestyle seemed easy to them. Zack was wrapping up post-secondary to be a paramedic and now he’s working that job, so that kept him really busy. Zack and I also adapted to the Discord life and joined our friends for online board games and show/movie watch parties.  We all can be pretty introverted so it didn’t drive us crazy.

I think the interesting thing about our band is despite choosing the approach to have a career or day job as the main source of income, we still take the project very seriously and want to see it grow and do well. We invest a lot of time, money and effort into it. I do believe you need to take the all-in approach and drop everything else in order to truly succeed in the current music industry, but I’m happy navigating around that option if it means I can keep creating music with my friends.

Some of our favourite bands (e.g. American Football, Toe) aren’t and were never very active touring bands, and have members with other jobs. They still developed a big following where if they did decide to do a North American tour, they could sell out a Mod Club-sized venue. That would be a pretty cool place to be at as a band. However, touring is currently irrelevant so we’re going to need to re-evaluate that goal (scratch out another US run, and a Japan or Europe tour).

We definitely want to release another a full-length record, this one we should be able to accomplish. An Audiotree live session or even a Little Elephant session was another bucket list goal we always had.

Lastly, we were always big fans of Topshelf Records and Triple Crown Records. I don’t think our band was active enough to be on those labels or was ever on their radars but at this point, we’d love to see our label Sunday Drive Records grow to the status of those labels because they have a great roster and an amazing team behind them. So if we could help that in some way, that would be quite the achievement.