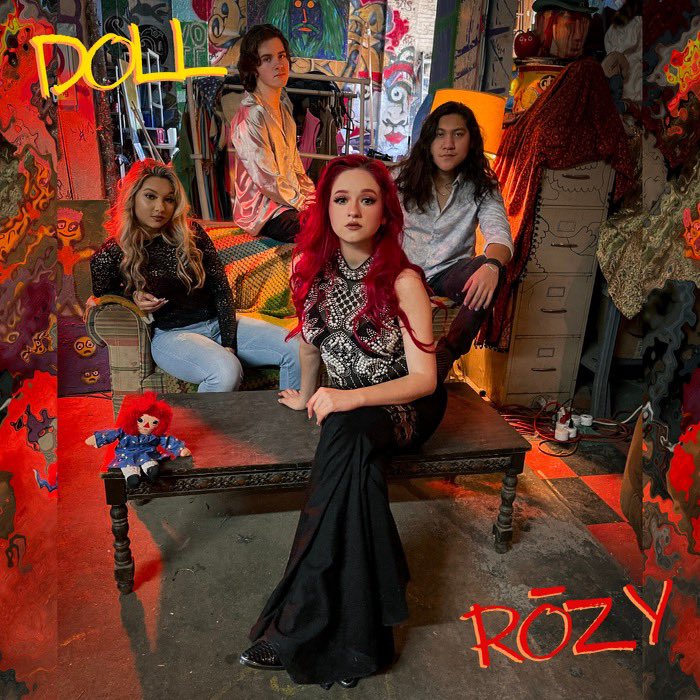 While radio stations often fill with songs focusing on negativity, jealousy, or romance, emerging band RōZY released their empowering pop-punk track “Doll” today that’s about refusing to let society tell you who to be.

Texas-based group RōZY, led by sisters Molly and Zoe Flores, are signed to Megaforce Records — known for legendary metal and rock artists like Metallica, Anthrax, Bad Brains, and Alien Ant Farm. Lead singer-songwriter and guitarist, Zoe, and drummer, percussionist, and backing vocalist, Molly began their journey by winning local talent competitions and appearing on the 2015 Vans Warped Tour. They were later joined by Brandon Martinez (guitar) in 2016 and Charlie Bubenik (bass) in 2019. Since then, they’ve opened up for acts like Puddle of Mudd, Drake Bell, former guitarist for Ozzy Osbourne Jake E. Lee, and The Iron Maidens.

Continuing to create powerful songs and play thrilling live shows that exude authenticity and grit, RōZY made the bold move to have their first-ever release be a cover of Nirvana’s “Come As You Are.”  They executed their take on the classic song beautifully with skilled musicianship and exciting stage presence. “Doll” is their third single to be released, following “Come as You Are” and “Pretty Little Lies” which both came out last year.

Like RōZY’s anthem “Pretty Little Lies,” this song has pop-punk vibes like the music many of us listened to during our middle school and high school years. Zoe told American Songwriter in a previous interview, “I think it’s cool to bring people back to that time period for three minutes.”

And it definitely does! The raspy-edged power vocals remind us of songs from the 2000s like Avril Lavigne or Kelly Clarkson, as Zoe’s voice carries lyrics of “I’ll never be your doll” in a manner both strong and soft. The track’s bridge showcases the higher, more velvety side of her vocals repeating “I won’t be your doll” drilling the theme of refusing to be pliable in a culture that constantly tries to puppeteer all of our behaviours and looks down on anything that falls outside of societal expectations.

“Doll” is a simply structured song, with not many extra bells and whistles like we often see in modern tunes which can be overkill. It’s stripped down to the core of what matters in good music: a rock’n backbeat, catchy and original songwriting, boppin’ guitar riffs, and purposeful vocals that make fans — and us — feel good while listening.

The accompanying music video demonstrates the band’s unique character with fun accents like Molly’s transparent drum set, Zoe’s silvery boots, how bandmates Brandon and Charlie smile as they jump in to sing parts of the song near the end, and even a guest appearance by a sock monkey.

Colors of black, white, and strategically placed hints of red catch our eyes; Zoe switches between a black glittery guitar and a red one that matches her hair, and in several instances a mound of Raggedy Anne dolls can be seen behind them. Lead-singer Zoe captures our attention with her expressive and animated nature: cutesy at first glance, but more so a fiery front-man.

We’re certain that the Raggedy Anne dolls were a specific choice as the dolls’ bright red hair reflects Zoe’s own, drawing the parallel between her and a doll. And though everyone can relate to the feeling of being suffocated by the pressure to pretend to be someone else to fit in, the image of a doll comes with misogynist implications. Barbie, Polly Pocket, and Bratz are all modern examples of the iconic doll that have evolved from past versions like Raggedy Anne; these highly feminized and moveable toys were, and still are, given to young girls as representations of how they should be: standardized, pretty, quiet, and obedient…what the song refuses to accept.

Most, if not all women, know this feeling all too well, especially those who grew up liking stereotypically non-feminine things. Lyrics of the song like “I’m proud of who I am” serve as a call to, and a great example for, women, fans, and young girls who may be struggling to turn off the voices telling them to change who they are to fit “the mold.”

While some artists fall under the guise of empowerment despite actually singing of revenge, blame, or subtly putting others down to feel better, songs like “Doll” by RōZY truly empower listeners by putting the importance on self-acceptance instead.

Something about listening to this song and watching the dynamic between the band members leaves us feeling upbeat. Despite being pop-punk, this band and their new single present a wholesome and strong air that’s exciting, leave us wanting more, and lay the ground for how RōZY will continue to make their mark.