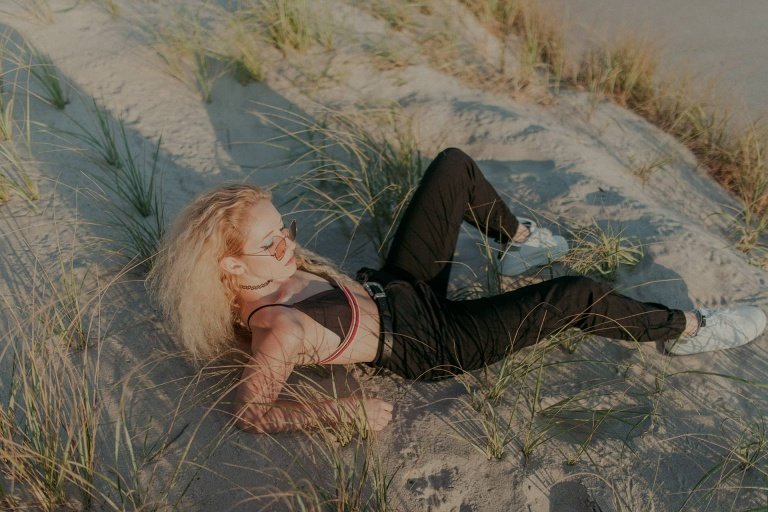 Interview: Skyler Cocco created “The Drive”, now she lives in a fanfic

Skyler Cocco is living the life I wished upon a tumblr fanfic for in 2012. She entered a song competition run by MUNA with a song that she put together in an hour. That song won her a Fender Strat & the love of a band she looked up to. “The Drive” is out now, and it is the dreamiest synth-pop magic I’ve ever heard. If you told me this was written in a million dollar writing session with Max Martin, Savan Kotecha, and Sia… I’d believe you. We had to talk to her about how this all came to be, and if the fanfic life is as good as I dreamed (spoiler: it is). Throw the song on below and keep scrolling to read our interview!

The story behind how this song came to be is unique, involving MUNA and a competition during a global pandemic (this sounds like Mad Libs). From your perspective, what was it like putting this song together? Did it differ from your usual process?

When I actually sat down and wrote the song, I was in the middle of the most repetitive routine in the midst of the pandemic. I’d wake up really late, lay in bed for hours, and maybe make it outside for a walk. I was really uninspired. On the day I received the email about the competition something in me said “you have to do this” so I downloaded the sample pack and just went for it. I found a guitar sample I liked and built the track around it, looping the verse section, and wrote the song all the way through the chorus in about an hour. I really didn’t have expectations for the competition. It was enough that I finally made something after months of no creativity.

My songwriting process isn’t much different, I usually start with production and then write the lyrics/melody to a rough production idea. The only difference this time was that it might be heard by MUNA, so I manifested a whole lot when I submitted the track.

Having one of your fave bands hear your music, love it, and share it reads like a tumblr fanfic I would have been obsessed with. What was it like to actually live in that reality?

I honestly felt like I was in a Black Mirror episode, the ones that have a happy ending. This was in May when everything was shut down and all these virtual events started taking place. It felt very dystopian being among 10,000 viewers watching Naomi McPherson casually talk about production at home, and at the same time I was anxiously anticipating whether my song would be chosen.

I was watching the stream alone in my bedroom studio. While Naomi was playing the four songs chosen, they mentioned tweeting about two of them. I frantically checked Twitter and saw that Naomi was talking about me, and I pretty much screamed like an absolute fangirl. I held it together and watched as Naomi and Katie Gavin talked about my songwriting and said some incredibly nice things about the song. Their fans were also super into it and asked where they could hear the full version. It was the most thrilling series of events.

Then Naomi chose me as the winner of the Fender Strat and I cried. I thought I was dreaming and would wake up at any moment. I was just so proud of myself.  Watching my work pay off for once made me feel like I was moving in the right direction. I was finally inspired and ready to work again, so I decided to make the song my next single for my artist project, with the encouragement of MUNA — I still can’t believe it!

This track was more synth driven than your usual music. Are you planning on moving in that direction or was it specifically for the competition?

I have been moving in this direction for a while and have been writing an EP that blends this synth-driven style with more alternative/indie elements in the same lane as Soccer Mommy and Haim. I’ve done a lot of work as a topliner and vocalist for EDM tracks, but I’m currently taking a break from that to focus on developing my sound as an indie artist. “The Drive” is a good example of the direction I’m moving in, somewhere on the indie-pop spectrum.

With the world in its current state, I feel like artists are either thriving online or struggling without that live element. How has it been for you?

The pandemic has made me feel all sorts of ways about the state of the world, but personally I have been so thankful for the time I’m spending at home. Right now I’ve been able to prioritize full-time production work and managing my artist project. There was always pressure to play live, especially in New York, so it’s been nice to focus on making the music and the accompanying visuals without having to promote and play shows. Telling my story authentically is really important to me, and I’ve been able to really hone that during this time. I’ve done a couple virtual live performances during quarantine and it was great to connect with fans who can’t come see me play in New York. I do miss playing live and having the energy of the crowd, but for now I’m content with taking a break from that.

BRKN Love are the real deal with new self-titled record

How are you staying creative right now? Picked up any new (or past) hobbies?

I’m getting more involved in the creation and production of my music videos. I directed and edited the music video for “The Drive” and was really excited to see my own storyboard come to life. Right now I’m planning music videos for a few of my upcoming songs and finishing up the EP. I do admit I’m kind of obsessed with TikTok and I really need to start making videos on there. I have so many ideas for them but just haven’t pushed myself to keep up with it. Since quarantine is probably here to stay for now, I’m going to make sure I start posting more on there.

What’s next for you? How can we support you?

I’m releasing an EP next year with all the songs I’ve been writing over quarantine. I’m so excited to share them. It’s the most honest I’ve been in my songwriting and I’m really happy with the messages I’ll be putting out into the world. For now, following my socials to stay tuned to the announcements for that project and watching the music video for “The Drive” will do the trick! I’m so thankful for all the support I’ve gotten on “The Drive” and can’t wait to release more music very soon. Thank you so much!