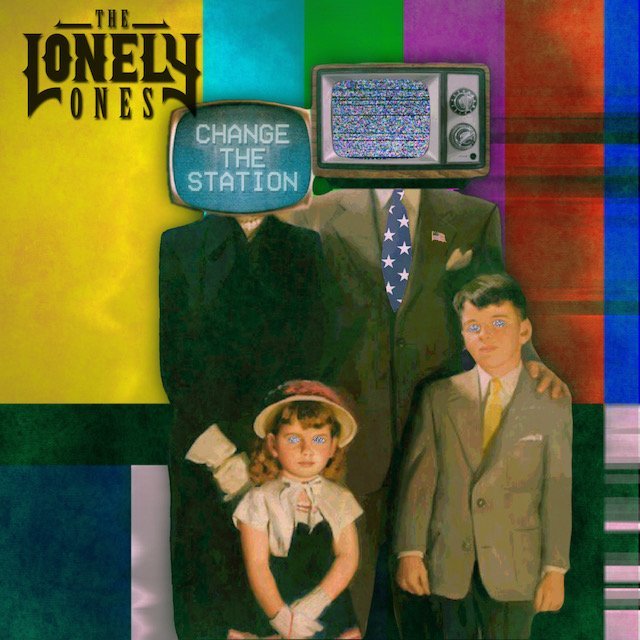 The Lonely Ones release timely political anthem, “Change The Station” as first single on Imagen Records

This one is for the Americans or anyone on the outside who’s been tuning in — pun intended — to events of the past year. If you’re looking for a rock track to help you express whatever feelings the recent tumultuous political sphere has brought out in you, we’ve found it.

The Lonely Ones released this raw and energetic song, “Change The Station,” on February 5th — almost exactly a month after the siege on the nation’s capital (coincidence?). Formed in the summer of 2019, The Lonely Ones are a vocal-oriented hard rock group comprised of Marty McCoy (guitar, vocals), Jake Earley (guitar, vocals), Tommy Johnson (drums), and Jymmy Tolland (bass, vocals) all formerly of Bobaflex. They released three original singles “Eternal Sadness,” “Real Big Trouble,” and “The Lonely One” independently in 2020, despite the hit to the music industry that COVID-19 brought with it.

They also released a unique and praised version of Queen’s classic song “Flash” in July of 2020. This past January, after experiencing obstacles with a former record label and going under their own record name for awhile, they were signed to Imagen Records and are continuing the momentum forward with their first release, under this new label, titled “Change The Station.”

Fans have previously referred to the group as “Rock Gods,” and it’s no wonder as their heavy electric sound rightfully appeals to fans of other artists like Bloodsimple, Royal Bliss, and the Union Underground, as well as fans of bigger names like AC/DC or Metallica.

“Change The Station,” produced by Joe Viers and Jake Mooney, begins with a robotic woman’s voice introducing the song in a creepy newscaster-like way with a couple of lines about the violence of humanity — to set the tone. From there, roaring and chanting crowd-like sounds propel an infectious drum and riff intro into purposefully distorted vocals. As their powerful single “The Lonely One” hypes-up listeners with its “We Will Rock You” like beat and attitude, “Change The Station” brings a similar high energy.

The accompanying music video, made with the help of Keith Williams from Island Road Media, cuts through shots of each band member seamlessly, moving with the tempo of the track and rotating to create a spinning effect. Taking place in a dark black room with a spotlight on each member not only emphasizes the band’s style but puts a certain weight on the track’s lyrics — Earley’s turquoise guitar being the only noticeable bit of colour.

We found lyrics of the song truly speak for themselves and include parts like the following section:

“The greatest nation seems a bit played out. Can we fake it? Just ignore the crowd. Retaliation. What makes the Boys so Proud? Are we great yet? Burn it down.”

At this point, we all know who the audience of this track is. And if you aren’t a member of said audience, or you don’t agree with the lyrics’ sentiments, well… you might just be considered part of a terrorist group now (at least in Canada). Perhaps you should do as the song’s title says.

Anyway, The Lonely Ones truly outdo themselves here with a catchy riff in the chorus and a vast vocal range showcased by well-executed harmonies. In addition, “Change the Station” demonstrates all of the band members’ instrumental virtuosity, proving that persisting through difficulties can result in brand new beginnings, coming out even stronger than before.

It’s clear The Lonely Ones have a fire in them that will allow this song to live on as a marker of the times. They’re definitely a band to watch as they seem to be steam-rolling ahead, even during a global pandemic. They have their eyes set on succeeding in their music, which might end up taking them to be one of the top hard rock bands in the country, if they aren’t already there.